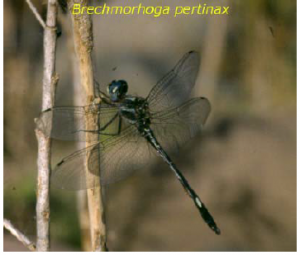 The Brechmorhaga pertinax (B.pertinax) is an extremely rare clubskimmer dragonfly, with only two documented identifications in Cochise and Coconino County, in the Grand Canyon region of Arizona. The Arizona Game and Fish Department (AZGFD) has listed the B. pertinax under an S1 status, which may allow them consideration as threatened or endangered according to the Endangered Species Act. END_OF_DOCUMENT_TOKEN_TO_BE_REPLACED